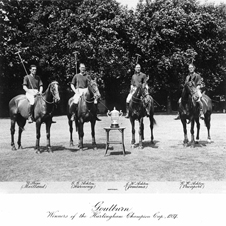 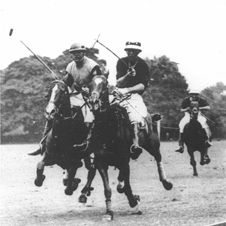 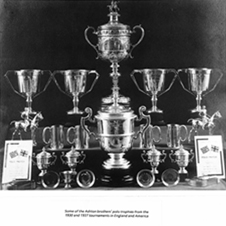 James Ashton Senior was born in 1860 in Australia to humble circumstances. By 1895 he had become the Minister for Lands in the NSW Administrative Assembly.

Foreseeing the coming ‘wool boom’, by 1920 he had bought his four sons a property called ‘Markdale’ in the NSW Southern Tablelands.

As the boys left boarding school they all returned to work on the family property, at the time an isolated sheep and cattle station, but today a well-known home and garden in country New South Wales and still owned by the Ashton family.

The four Ashton boys were fit young men who were looking for a physical and social outlet away from the station. Being in such a remote area meant there were not enough men on farms to make up cricket or football teams. Fortunately a retired British Artillery Officer introduced the game of polo to the local township of Goulburn and the four boys took to this new sport with vigour. Every Friday they would trot their horses the 90 kilometres to Goulburn and play polo on Saturday and Sunday. On Monday the grooms would trot the horses homeward. The eldest brother, James Hay, maintained this was one of the reasons why the Ashton polo ponies became known for their strength, calmness and endurance.

From 1920 to 1928 the Ashton brothers devoted much of their time to supplying horses to the British Cavalry in India, growing wool and playing polo. They ultimately became the number one polo team in Australia and were unbeatable. The Ashton brothers final handicaps were: James (7), Bob (8), Geoff (8), Philip (6). The next step was to compete in England.

Thus began plans for an ambitious three-month boat trip to the mother country. Taking 26 polo ponies involved installing loose horse boxes and a small round sand yard on the ship’s deck to exercise and train them. It was a challenging trip – at one point they were almost shipwrecked and just managed to save a pony from going overboard in a severe storm in the Mediterranean.

The British press got wind of the Ashton brothers’ ambitious endeavour before they left Sydney and categorically stated they would never arrive in Britain; they would never play a game of polo in Britain; and, they would certainly never win a game! By April 1930, within two weeks of arriving in England they had played and won their first game.

THE CHAMPION CUP AT HURLINGHAM

Over the 1930 British polo season the Ashton brothers played with great success being beaten narrowly only three times. But, their ultimate aim was to win The Champion Cup at Hurlingham – a 24 goal tournament and the most prestigious and highest goal competition at that time. They won their preliminary rounds and after a fast and furious final the Ashton brothers were beaten in extra time. The King of Spain, so impressed by their performance, had a cup made in their honour.

News of the now famous Ashton brothers had crossed the Atlantic. Catching the imagination of the American polo community, in particular the Long Island Polo Club, the Ashtons were invited to visit the United States all expenses paid.

So, they once again boarded a boat with their horses and in August 1930 took the American polo season by storm. Despite winning most of their games, they were narrowly defeated by America’s best polo team, but this time managed to successfully sell their 26 polo ponies at the end of the season.

They returned home not only to a hero’s welcome for their sporting success, but with enough money to have financed the trip and for each brother to buy a substantial grazing station.

WAR AND THE ASHTON CUP

Despite the shadow of war looming, in 1937 the Ashton brother’s returned to England and not only succeeded in winning the Champion Cup at Hurlingham, but also managed to sell their ponies at the end of the season.

After the devastation of World War II, Lord Cowdray reached out to his Australian friends James Hay (known as Jim) and Bob Ashton asking for their assistance to help the British Polo Association re-establish the great game. In recognition, today the winner of the subsidiary final in the Gold Cup at Cowdray Park plays for The Ashton Cup.

The late Hector King (born 1919, died 1968) began his polo career at ‘Markdale’ Binda near Crookwell owned by the Ashton family where his father was overseer. In 1937, as a young man he travelled with the Ashton ponies on their second trip to England during which Bob, Geoff and Jim Ashton and Bob Skene won the Champion Cup. He served with the RAAF in World War II in Darwin and New Guinea. After the war he was one of the players resurrecting polo at Kyeemagh, (before resumption for Sydney Airport extensions) later playing at ‘Tingewick’ Austral owned by Jack Dudley then at ‘Beltana’ Rossmore which in 1953 he acquired with Ken Austin for use as a polo base and home for the County Polo Club (later known as Sydney Polo Club). In 1947 he and his brothers-in-law Jack, Larry and Ken Austin assembled and took 20 polo ponies to Jaipur which they played and then sold to the famous Maharaja and another draft in 1948 to the Riviera Country Club (Los Angeles) where ponies were sold to Spencer Tracy, Walt Disney, David O. Zelnick and other members.

Playing at No.2 Hector attained a 5 goal handicap and in 1960 was in the winning team at the Sydney Royal Easter Show polo competition and also won the inter-state competition for the Australasian Cup playing for NSW with Theo Hill, Sinclair Hill and Peter Cudmore. He was famous for his horsemanship, striking of the ball and anticipation. As club captain at County, he was very generous with his time in coaching new players, and with improving their standard of play by including them in teams which he captained. On his premature sudden death from staphylococcal aureus (golden staph), a Cup was instituted in his memory to formalize a tournament in which lower rated players could gain experience by playing along side better players in medium goal polo- as encouraged by Hector King during his lifetime.